Plot: Julia Meadows (Keri Russell), a school teacher in a small town in Oregon, becomes concerned about one of her students, a young boy named Lucas Weaver (Jeremy T. Thomas), who is showing signs of dealing with potential abuse. What Julia doesn’t know is that Lucas is hiding a secret at home and it’s more frightening than she could have ever imagined.

Review: In my review of Scott Derrickson’s The Black Phone, I pointed to Antlers as another horror film I viewed within the last week that dived into real-life horrors that played alongside the tropes we have come to expect from the genre. Horror films have always, in my opinion, been the best sources of social commentary in entertainment because they are able to get their points across without being heavy-handed. You’ll respond more favorably to a horror film rather than a hard-hitting drama about certain issues because the commentary is woven into the narrative rather than being the central focus. You can pick up on it more because it sinks into your subconscious. The Black Phone accomplished this and it could be argued that Antlers accomplishes this feat with even more success. If not for a climax that doesn’t 100% live up to the mood and atmosphere it has expertly set up, Antlers could rival that film in many ways but even with that small caveat, the Scott Cooper-directed film is unsettling and unrelenting in its depiction of real-life horror that collides with the supernatural and folklore.

Based on Nick Antosca’s short story “The Quiet Boy,” Antlers is a bit of a slow burn experience but the world that Cooper creates in this small Oregon town is arresting enough to cast us under its spell. Camerawork from DP Florian Hoffmeister does a masterful job of capturing the dreariness of life in the area and it hints at a town that is hiding secrets. Excluding the supernatural element that is also central to the story, Cispus Falls is a town riddled with issues including a local police force that can’t keep up with an opioid crisis that has ravaged the town. The film reflects the dismal time for the working class in a place that has allowed time to pass them by. This element of the story is crucial because when strange things begin to happen, it’s suggested that they’re merely a casualty of their current lifestyle and experiences. It’s a sad take on how society can sometimes cast certain people aside without much thought.

This isn’t the case with Keri Russell’s Julia Meadows. Julia, who on the surface is a devoted teacher, is dealing with past trauma from abuse put upon her and her brother Paul (Jesse Plemons) by their father. Julia fled to escape the abuse and left her brother behind but now she’s back in their childhood home living with her brother and trying to piece her life together that is clearly still very fractured. This is why she connects with Lucas. She sees something in him that reminds him of herself. She sees the red flags and eventually begins to seek some kind of redemption by helping him. Julia can’t begin to know what is really going on with Lucas but Cooper, along with his co-writers C. Henry Chaisson and Nick Antosca, who also penned the short story, make the idea of the horrors of what he’s going through and what’s actually happening, equally palpable. We know that this is a horror film and we learn early on that what’s going on in his house goes beyond what a normal person could comprehend but there is power in suggestion and that suggestion of the pain Julia thinks Lucas is going through proves to be even more haunting and powerful than the creature that is emerging in a locked room in Lucas’ house.

Producer Guillermo Del Toro spearheaded this project in a big way and his fingerprints are all over the supernatural element that involves evil spirits, local creature legends, and the transformation of people who become possessed and turned into human-eating monsters. The monster at the center of the film isn’t really seen in its full glory until later in the film but, once revealed, it feels like it could very well be in a movie directed by Del Toro. It’s a stunning creature design and it definitely leaves a lasting impression. Also of note is the actual physical transformation into the creature itself. It’s painfully gut-wrenching and is one of the more unsettling moments of the film. In a way, Cooper and Del Toro become perfectly symbiotic for this story. Cooper’s skills are more suited for the realistic heavy-lifting while Del Toro’s imagination brings out the more fantastical moments of the story. It’s the perfect marriage of ideas and while Cooper’s input represents the more engaging part of Antlers, Del Toro’s sensibilities, even as a producer, put his signature stamp on the project that will pull in genre fans looking for a traditionally horrific experience.

The performances in Antlers are 100% committed and give the film an emotional core that keeps us invested. Keri Russell has to dial in a few different emotions and she manages these with ease. On the one hand, she’s the caring teacher who is looking out for a student who is in distress, and on the other hand, she is a puddle of deep and unresolved emotional issues. It’s not a performance that relies on scenes of big emotional outbursts. It’s all very subtle and Russell does a lot of great work with just a look. Take a couple of scenes that show her character at a liquor store, clearly eyeing a bottle of alcohol but resisting the temptation to buy it. The story doesn’t need to spell out that her character has struggled with this problem but Russell tells us all we need to hear without even saying a word. In the role of her brother, Jesse Plemons appears to have things together on the surface but he was clearly affected by, not only their father’s abuse but by his sister’s decision to leave as he then had to deal with it on his own. Also, in his role as the local sheriff, Plemons does a solid job of depicting someone who is beyond his depth as the town’s issues grow darker.

Despite these strong turns, the film belongs to young Jeremy T. Thomas who does most of the film’s heavy-lifting as Lucas. On the surface, he could come off as the typical creepy kid in a horror movie with his dead eyes and malnourished look but Thomas soon draws you in by conveying all the right emotions of a kid who has taken on a responsibility no child should have to deal with. Thomas provides the film with much of its emotional weight and the horrors he has to deal with offer up the film’s best moments, even if they are bleak.

The film only stumbles during its climax and that could very well be due to my bloated expectations because what came before it was so very well executed. There are moments during the climax that generate solid tension and even high emotion but Antlers has to fight the dilemma of how to effectively end a creature feature when the creature in question is so powerful. I suppose the outcome is the best that could be expected but the final showdown so to speak lacks the power of the build-up. That being said, the same can’t be said about the film’s final moments before the credits roll. It’s equal parts chilling and heartbreaking.

During Beyond Fest, where I was lucky enough to see the film on Monday, director Scott Cooper, who was in attendance with Guillermo Del Toro, joked that Del Toro said that no one seemed to realize that Cooper’s previous efforts were actually horror films. The exchange got a laugh out of the crowd but if you look at some of Cooper’s films like Crazy Heart or Out of the Furnace, they deal with real-life trauma and horrors that are frightening in their own right. In Crazy Heart it was addiction and in Out of the Furnace it was the deep woes of a formerly flourishing industry town and the people doing whatever than can to survive within it. These sensibilities serve Cooper well in his first foray into a true genre effort as he has crafted one of the most emotionally driven horror films released in some time that demonstrates the anguish of personal trauma mixed with a supernatural tale that will hold the attention of horror fans. 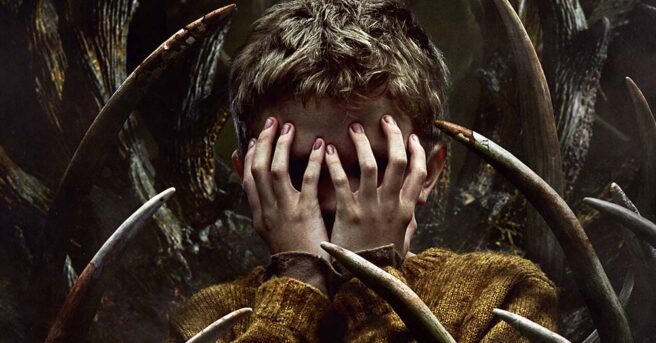