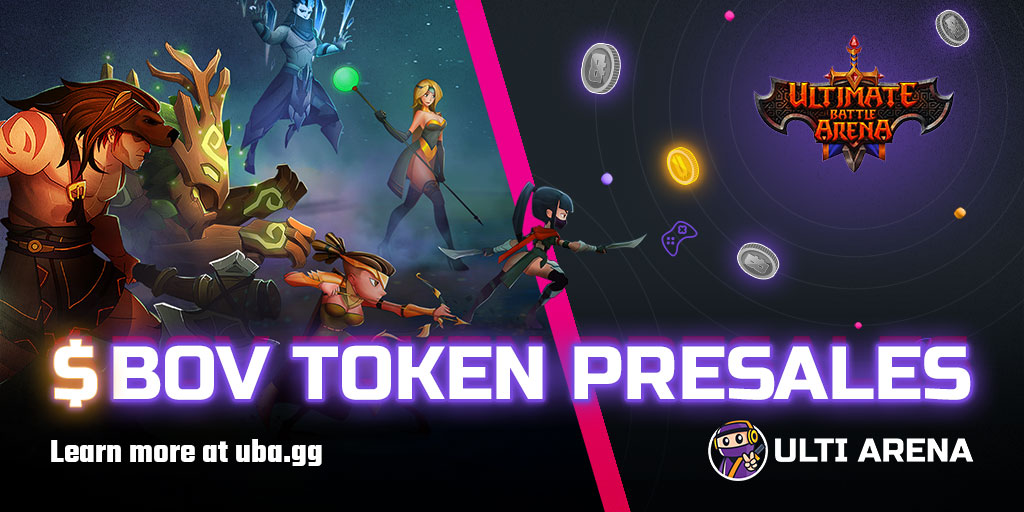 The grandest Play-to-Earn ecosystem is here!

Ulti Arena, the maker of Proof-of-Gaming is set to release a new token called Benders of Valor or $BOV on 19th January 2022.

Just as Axie Infinity has SLP tokens, $BOV is the in-game currency and rewards token of Ultimate Battle Arena, a blockchain game on the Polygon Network that allows players to purchase, collect, fuse, and sell Ultimates.

Ultimate Battle Arena is a Crypto Collectible Card Game and MOBA-inspired universe where anyone can earn Benders of Valor ($BOV) tokens through skilled gameplay and contributions. It’s a digital collection where players can battle, collect, modify and fuse their Ultimates. Each Ultimate possesses a different set of characteristics that determine their role in the battle. Each Ultimate is a non-fungible token (NFT). They are unique and owned by the user, validated through the blockchain, and its value can be appreciated or depreciated based on the marketplace. Since Ultimates are tokens on a blockchain, they can be bought, sold, or transferred digitally, with a guarantee of ownership. Ultimates have an infinite number of copies on the Marketplace (NFT’s with multiple copies). Each copy has distinct stats stored in a smart contract.

Collectible card games are something everyone in their thirties and forties is probably familiar with. No matter if you invested your pocket money in the original Magic the Gathering decks or settled for some less popular and known cards. CCGs were definitely a thing in the 1990s. Now the teenagers from that time are grown up with their own entertainment budgets looking for a thrill they remember from the past. The new digital generation of collectible card games is ready to respond to this need.

If, however, for some reason, you still don’t know what the CCGs are, let us start with a short introduction. (If you’ve spent hundreds of hours playing MTG with your friends, you can safely skip this part).

The definition from Wikipedia is the perfect place to begin the explanation quest:

“A collectible card game (CCG) is generally defined as a game where players acquire cards into a personal collection from which they create customized decks of cards and challenge other players in matches. Players usually start by purchasing a starter deck that is ready to play, but additional cards are obtained from randomized booster packs or by trading with other players. The goal of most CCGs is to beat one’s opponent by crafting customized decks that play to synergies of card combinations.”

In other words, to be a successful player, you need to combine experience (you need to know how to play) with a deck that’s strong enough and well-balanced. Since the booster packs are randomized, CCGs also come with a slight thrill of gambling. One can never be certain what cards they buy in the next booster pack.

It’s interesting to take a look at what Magic was inspired by. So we invite you to start the journey into the world of CCGs from there.

Ulti Arena is a SLEEPING GIANT and has the growth potential of The Sandbox and Axie. Here’s why…

As if it’s not enough yet, Ulti Arena has added a new Advisor to their already impressive fleet: SEBASTIEN BORGET, Co-Founder and COO of The Sandbox just joined the ranks, together with CHARLIE HU (Head of Polygon China), ARI LAST (VP for Business Development at Simplex), among with many others! https://ultiarena.com/team-ulti/index.html

Their advisors are fundamental to the growth, expansion, and notability of Ulti Arena, as they will support the project by providing industry knowledge, expertise, and connections in terms of marketing, sales, business development, Tier 1 exchange listings, and product scaling.

Visit the official website https://uba.gg to learn more about how you can participate in the pre-sale and get whitelisted.

You can read the FAQ here: https://ulti-arena.medium.com/how-to-participate-in-bov-token-presales-ultimate-battle-arena-uba-play-2-earn-p2e-9338297e25e2