Plot: Based on the award-winning novels by Isaac Asimov, Foundation chronicles a band of exiles on their monumental journey to save humanity and rebuild civilization amid the fall of the Galactic Empire.

Review: The journey of Isaac Asimov’s novel Foundation from page to screen has been long and arduous. In the seventy years since it was published, attempts have been made by two studios and HBO before Apple finally made it happen. Long considered a seminal work of science fiction equal to Dune, Foundation is a landmark work that has influenced real-world concepts in sociology, economics, and technology as well as inspiring Nobel Prize winners, politicians, and even Elon Musk. Now a multi-million dollar epic, Foundation brings an esteemed cast and top-notch special effects to a series that aims to be the next Game of Thrones. So, does the book that many thought to be unfilmable succeed in becoming a long-form television series? Sort of.

With the requisite changes needed to inject some racial and gender diversity into a book populated primarily by white, male characters, Foundation is an absolutely beautiful series that suffers from a lot of talking and not much else. Over the ten-episode series, the series spans decades of time and billions of miles set across the entirety of a galaxy. We are immediately introduced to multiple characters of significance with Gaal Dornick (Lou Llobell) at the center. A brilliant young mathematician, Gaal is summoned to the planet of Trantor by psychohistorian Hari Seldon (Jared Harris). Seldon has a prediction that the Empire will fall which angers the three cloned leaders, Brother Day (Lee Pace), Brother Dusk (Terrence Mann), and Brother Dawn (Cassian Bilton). Exiled to the farthest reaches of the galaxy, Seldon and Gaal must build the foundation for the society that will succeed the Empire. Everything I just described is crammed into the first episode of the series, leaving nine chapters for the intricate narrative to play out.

Foundation is really, at its core, about the endings and beginnings of societies. Inspired by chronicles of the rise and fall of the Roman Empire, Isaac Asimov’s stories have developed a dedicated following due to the themes and predictions they contain rather than serving as pulse-pounding adventures. In fact, Foundation as a novel is dry and a little boring. Creators David Goyer and Josh Friedman had to inject the exposition-heavy source material with some energy which is why there is a lot more sex and violence than in the 1951 novel. Taking a cue from, you guessed it, Game of Thrones, Foundation has its share of palace intrigue and some large-scale action sequences despite being very much a character-driven look at how politics, religion, and power can alter the landscape of entire civilizations.

This series also benefits from some solid acting talent from established performers and newcomers alike. Both Jared Harris and Lee Pace have proven their acting excellence on the big screen and small with Foundation being no exception. Harris delivers a subdued performance while Pace blends elements from his Hobbit character Thranduil with his MCU role of Ronan the Accuser to play Emperor Cleon in multiple iterations, each slightly different than the last. There are several recognizable faces through this series including Alfred Enoch, Clarke Peters, T’Nia Miller and more but the real standouts are Leah Harvey, Lou Llobell, and Laura Birn. Llobel and Harvey each play gender-flipped characters from the novels, Gaal Dornick and Salvor Hardin. Both characters are true to the source material, but these actresses imbue their performances with many layers that are a pleasure to unpack as the episodes progress. Laura Brin portrays Demerzel who is a steadfast servant of the Empire and one of my favorite characters in this series.

With direction from Rupert Sanders (Snow White and The Huntsman) on the premiere and Alex Graves (Game of Thrones), Andrew Bernstein, Roxann Dawson (The Americans), and Jennifer Phang (The Boys) on the back nine, Foundation looks to be worth every penny that Apple spent on it. The production values are stellar and rival any feature film in recent memory. The score from Bear McCreary (Battlestar Galactica, The Walking Dead) is aurally haunting. It also benefits from having Asimov’s daughter, Robyn, onboard as a consulting producer, ensuring that the legacy of the Foundation series is respected. This series is very reverential to its creator even if it has transformed into a 21st-century revision of the author’s post-World War II themes. This is still a prescient tale that is far more rooted in real science than it is in fantastical fiction.

Despite saying all of these great things about Foundation, I still feel that it is desperately lacking the one thing that it needs to be great. The acting is solid despite everyone having to spout complicated dialogue about planets and customs foreign to the audience. Like any new sci-fi universe, you should be prepared to be confused as you try and discern which people align with which faction. This is likely why Apple is launching a companion podcast to go along with this series. Like Dune, Foundation has a dedicated fanbase who have been waiting for years to finally see this adaptation. Overall, they should be pleased with this series while newcomers may be left underwhelmed by the slow-burn story. There is a lot to unpack here and I found that with each subsequent episode I was more invested in the story, but I am not sure if general audiences will be invested enough to see this through to the end. Those that do will be rewarded with high drama and spectacular visuals, but it will take some patience to get there. 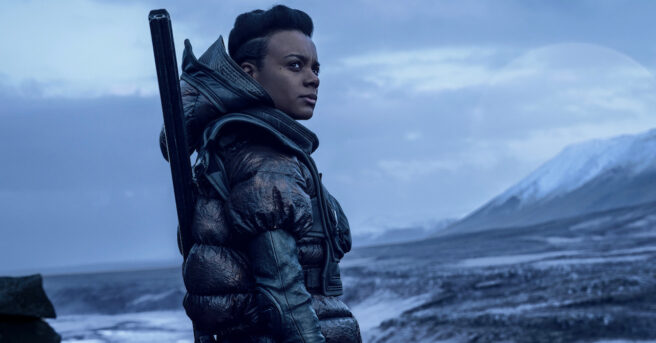