PLOT: A single mother (Carrie Coon) and her two kids (McKenna Grace and Finn Wolfhard) move to a small town in Oklahoma, where they’ve been left a dilapidated farmhouse. But, it turns out the family has a personal connection to a now-deceased ghostbuster and that the town they’ve moved to has some significant paranormal activity lurking beneath the surface.

REVIEW: Flashback to the end of August this year. I was attending Cinemacon for JoBlo in Las Vegas. At the Sony Panel, Jason Reitman and his father, Ivan Reitman, walked out on stage to tell us that we’d be the first audience to see Ghostbusters: Afterlife. Now, the conference was all about bringing the big screen back, and sure enough, we’ve gotten a few successful movies since then. Sony was on hand to promise that they had the goods for a significant holiday release with this long-awaited spin-off of one of their biggest franchises ever, and sure enough, they had good reason to be optimistic.

Ghostbusters: Afterlife is, in some ways, a bit like a Ghostbusters 3. Now, that’s not to say that it focuses on the original Ghostbusters – it doesn’t. But, it takes place in the same world as the other films do. Here, the Ghostbusters were real guys who saved New York under odd circumstances in the eighties, but they’ve mostly been forgotten. Enter a new family, headed by Carrie Coon’s Callie, with Finn Wolfhard’s Trevor and McKenna Grace’s Phoebe as her two kids. They head to a decayed farmhouse in Summerville, Oklahoma, that’s been passed down by a dead relative. Of course, the family has some connection to the late Egon Spengler, as famously played by Harold Ramis, but the true nature of the relationship is better for you to find out watching the movie than for me to tell you.

The film focuses mostly on McKenna Grace. She’s a nerdy, Egon-esque kid who can’t help but be fascinated by some of the old relics she finds. These relics include a functioning ghost trap. She brings it to her new teacher, Paul Rudd’s Mr. Grooberson, who’s a Ghostbusters fanboy, and all hell breaks loose – literally. Soon Phoebe, her brother and two other kids from the neighbourhood, Celeste O’Connor’s Lucky and Logan Kim’s Podcast (so-named because he hosts a podcast), end up finding Ecto-1 plus Egon’s old proton pack and give chase to a fresh batch of ghosts.

To be sure, this new Ghostbusters skews a bit younger than the original film did. It seems partially inspired by Stranger Things in this way. However, director Jason Reitman knows his father’s franchise and also knows that you can’t make it too vanilla. So the kids are edgier than you’d think. They are very much approximations of the characters played so iconically in the original films. Grace’s Phoebe is the Egon-like scientist, Kim’s Podcast is the crazy conspiracy theorist – a la Ray, O’Connor’s Lucky is the realist, kind of like Winston (with her dad – played by Bokeem Woodbine, the town’s sheriff). At the same time, Wolfhard’s Trevor is the girl-crazy cut-up (with a big thing for Lucky). He’s the Venkman of the group.

It may not sound super original, but damn, if it’s not ridiculously entertaining from start to finish. Reitman (along with co-writer Gil Keanan of Monster House) has made a love letter to his father’s film, with the whole score by Rob Simonsen done in the Elmer Bernstein style of the original. Grace comes into her own as the potential star of a new franchise. She may be Egon-esque, but she’s more fragile and emotional than he was. Her bond with him (so to speak) is beautifully done. Wolfhard is fun channelling Bill Murray to some degree, while Kim and O’Connor are both highly likeable.

As for the adults, Carrie Coon gives her character some real soul and edge. She’s a broke single mother of two who resents being forced into this junkyard farmhouse. They give her her a cynical edge that suits her circumstances. Yet, she’s also warm and loving to her kids, and you like her right away. Paul Rudd, of course, feels born to be in a Ghostbusters movie. He plays the town’s science teacher who winds up with a big crush on their mom. You can tell all involved just delight in his presence.

As for the big bad, I can’t reveal who or what it is, other than to say it relates somehow to the franchise’s history and happens to include two pretty big stars they haven’t revealed in any of the marketing. The film has a much more legitimate menace than the second, making it more in line with the first. They’ve ignored the 2016 reboot in favour of making this a legit follow-up.

As for the original Ghostbusters – I can’t go into their roles here. I think doing so would spoil the movie. Other reviews will likely give it all away, but suffice to say, franchise fans will probably not be disappointed. Stuff…happens, but also in a way that doesn’t take the focus off the new characters. The film is also a unique departure for Jason Reitman, who never tackled a massive tentpole movie before, but seems more than up to the task. He doesn’t copy his dad’s style, despite the homages. Instead, he has a vibe of his own that reminded me a bit of George Lucas circa American Graffiti, which I found pretty pleasing. Likewise, the cinematography by Eric Steelberg nods at the original but doesn’t copy it, with the look relatively warm and naturalistic.

Of course, some fans probably want Murray, Ackroyd, Hudson and Weaver leading a full-on third Ghostbusters movie. After the death of Ramis, that was never in the cards. Instead, Reitman has delivered an affectionate tribute to the late, great man, as well as his own father’s enduring classic. One thing to note though – stay all the way through the closing credits. You won’t be sorry. 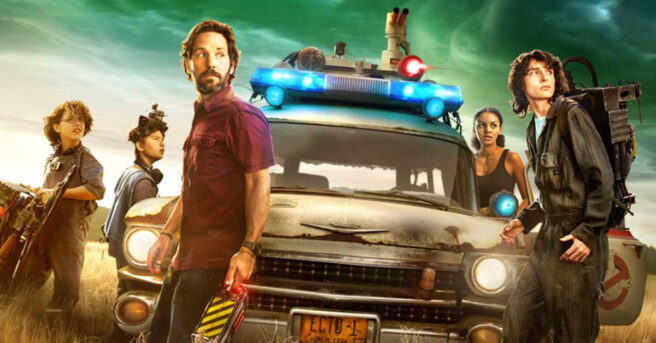