PLOT: After narrowly escaping a bloody reunion with Michael Myers, Laurie Strode and her mother and granddaughter believe they’ve destroyed the “boogeyman.” Yet soon, they realize that the masked madman isn’t finished with his rampage. This time, however, the town of Haddonfield is ready to fight back.

LOWDOWN: When you think of Halloween, the name Michael Myers comes to mind. The same is true with Laurie Strode. These names, along with Jamie Lloyd, Sam Loomis, and hell, even Ben Tramer will resonate with horror fans. And the same can be said about Haddonfield, the fictional town where Judith Myers was murdered in cold blood by her younger brother on that fateful Halloween night. With every sequel, including Rob Zombie’s double-take on the masked psychopath, we’ve witnessed numerous features about the citizens of this sleepy little community. And in the latest chapter, Halloween Kills, David Gordon Green has taken a deep dive into Myers’ hometown. It may revel in nostalgia, yet it still manages to bring something compelling to the popular horror series.  Let’s take a stab at the latest entry into this terrifying town.

After the brutal attack and ultimate survival of Laurie Strode (Jamie Lee Curtis), her daughter Karen (Judy Greer), and her granddaughter Allyson (Andi Matichak), the three believe they’ve conquered evil. They haven’t. Michael Myers escaped what would’ve been a fiery death, only to continue his horrific assault on the community at hand. This time, the film re-introduces fellow survivor Tommy Doyle (this time played by Anthony Michael Hall), who has plans of his own. Along with a few familiar faces to the series, Tommy leads a charge to rid Haddonfield of the boogeyman. All the while, Michael is prowling the streets, searching for victims and making his way to the place he knew as home. While the recent trailer reveals quite a lot of what takes place, you’ll still find a healthy amount of tricks and treats that will please fans that have grown to love this iconic franchise.

David Gordon Green and co-screenwriters Danny McBride and Scott Teems produced something unique with the second feature in this planned trilogy. Here, he explores the effects of grief and PTSD more than we’ve seen before from horror films in general – although the Halloween franchise has perhaps done a better job than most. While we did get a taste of this in Halloween: H2O, here we see the immediate effects of loss courtesy of Judy Greer and Andi Matichak. You could also take into account the entire denizens that gather together to destroy this boogeyman that they are all tired of the dreaded curse upon their home. Haddonfield is a town that is ready to bury the dead and move on from the nightmare. It’s a fascinating concept, one that works well in the world that Green and company created.

The biggest issue here might be that this is the middle story. Kills is not the promised finale that we’ll be witnessing next with Halloween Ends. And one of the most appealing aspects of Halloween is the fight between Michael Myers and Laurie Strode. If you are hoping for a face-off between the two, you might be disappointed. That’s sure to be the focus of next year’s entry. Thankfully, both Judy Greer and Andi Malichak are ready to carry the torch. It’s especially gratifying to watch someone as talented as Greer take on such material. The actress has the challenging task of dealing with loss, the horrible realization her mother was right, and staying true to her nurturing personality. It’s impressive work, and the moments she shares with Jamie Lee are especially credible and damn near touching. As a family, I’ve grown attached to the three characters.

And then there is Michael Myers. Nick Castle and James Jude Courtney return to bring “The Shape” back to life. And Michael Myers is exceptionally cruel this time around. The masked maniac wants to play. Myers remains a scary lurk in the dark kind of character, yet he’s even more ferocious this time. The scenes of bloodshed and violence he brings to this quiet little town are graphic and intense. And yes, this one is a bloody mess in the best of ways. If you felt that the previous feature was light on the red, you’ll be pleased with the gruesome horrors on display here. Perhaps almost being burned alive in earlier installments didn’t sit well with the big fella. With Courtney taking on most of the heavy lifting for the second time, he brings a sinister nature to this beast of a man. As well, Castle appears in an effective sequence that is bound to excite fans of the original.

The return of a few characters from the first film is yet another treat for longtime fans. They include Lindsey Wallace (Kyle Richards), Marion Chambers (Nancy Stephens), and the legendary Charles Cyphers as Leigh Brackett, and their involvement generally adds and doesn’t detract from the terror on display. Even still, some of these side characters are not as fully fleshed out as they could’ve been. Filling in for a few other familiar characters, you have Anthony Michael Hall as Tommy Doyle and Robert Longstreet taking on Lonnie Elam. If you’ve been fond of this series since Carpenter’s original classic, the inclusion of these characters truly helps make the mythology explored by Green and company complete.

And speaking of characters, the score by John Carpenter, Cody Carpenter, and Daniel A. Davies is just as important as anything else here. While they still stand by the tried and true original themes, the composition takes a few creepy turns. One sequence featuring Michael and Allyson brings something unique to the film. Add to that a few moments where we witness true nostalgia, and you have one of the purest Halloween sequels thus far. With original cast members returning, a familiar sound, and a director willing to explore a familiar story through fresh eyes, the new sequel will likely satisfy those looking for a good scare.

GORE: The latest installment in the Halloween franchise brings it on. Neck stabbings, eye-gouging, pickaxe murders, and so much more. One poor guy has Myers using a whole set of knives on him and it looks pretty damn painful. Michael isn’t playing this time around, and he’s bringing on more of the gore. This middle chapter of David Gordon Green’s Halloween trilogy is one of the bloodiest in the franchise.

BOTTOM LINE: Halloween Kills is an impressive sequel. It delights in a huge body count, brutal murders, and a solid middle film in the new trilogy. Michael Myers is scary here. And the winks and nods to Carpenters’ original work do the new film a favor – with a few fun hints at some of the other sequels, a couple you can get a sense of in the trailer. David Gordon Green’s continued exploration of the myth of Myers works in unexpected ways. The idea of featuring the town of Haddonfield feels relevant. The small town faced with unimaginable horrors still works. And yes, while she may allow both Ms. Greer and Ms. Malichak to take on some of the more action-oriented material involved, Jamie Lee Curtis beautifully transforms into a Laurie Strode that is ready to end it all no matter the cost. Bring on Halloween Ends! 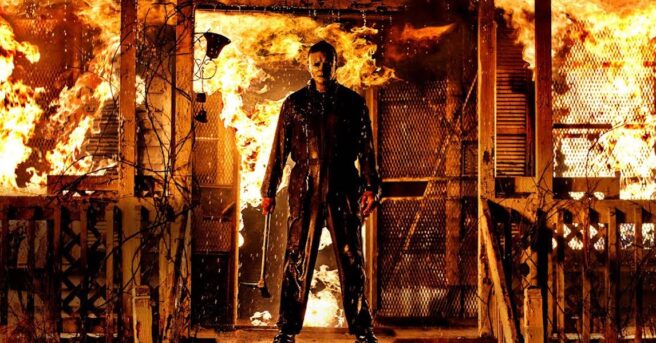