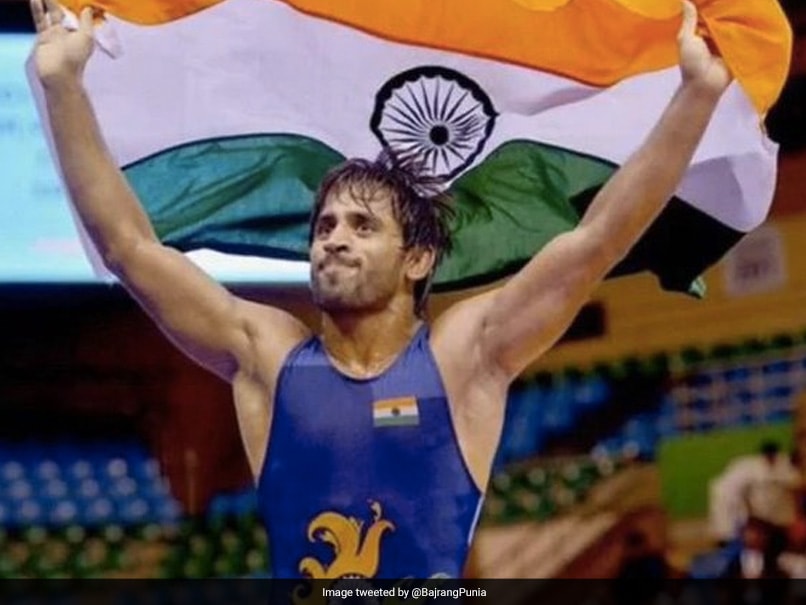 Bajrang Punia is training in Russia to get ready for the Tokyo Games. He suffered a knee injury and forfeited his semi-final bout against Russia’s Abdulmazhid Kudiev in Ali Aliyev meet in Russia on Friday. But his coach says he will be back in 10 days. Bajrang is seeded No.2 in the 65 Kg category at the Tokyo Olympics and he said that if he manages to win a medal at the quadrennial event, he will dedicate it to the Covid warriors. Earlier he spoke to NDTV about his preparations. The 2018 Asian Games Gold Medallist said that he is a much-improved wrestler now.

“I would love my body to work in the Olympics the way it did in the 2018 Asian Games bout, and hope the result is also similar,” Bajrang said

“The fact that I won at the Asian Games doesn’t mean I was perfect, there were still things to be worked upon, and I hope I have covered those weaknesses before the Olympics in the 2 or 3 years since then.”

Bajrang said that he is hoping to avoid making any mistakes during the Games in Tokyo. The wrestler also mentioned that he has worked on one of his weaknesses — conceding points on leg attack.

“Absolutely, that is what we do training for to try and fix. I felt the results in the tournaments have worked my way. Olympics is a platform where every athlete tries their best, so we need to make sure we don’t make any mistakes because those remain with us for the rest of our lives,” Bajrang said.

I’m trying to make no mistakes on the mat on the ultimate day, so I’m completely following the schedule set for me by my coaches. My parents say that nobody can steal your hard work from you, so I would tell myself and any other athlete that you should work so hard that God himself would say this person deserves to win,” he added.

Bajrang, who had stopped being on social media to focus on his training for Tokyo Olympics, returned to help others during Covid crisis in the country.

“When Covid first began, my intentions were to help as many people as I could, even helping one person would be important – even if I could help save one life, I would be very fortunate. I had closed social media for the training process and my team handled it so that I could focus on the Olympics. But once the number of cases started rising again, I thought that I needed to help people any way I could, and even appeal to the people by asking them to stay at home and stay safe.”

“I didn’t want the people to think there was something political about this, so I just spoke to them as a player, thinking they would listen to us better. That’s what brought me back, and the idea of helping anyone with medical needs or need for food. Olympics will happen again in 4 years, but we are only given one life, and saving anyone would make me happy, thinking that I had served an important purpose in their life, the Olympic-bound wrestler added.

A very confident Bajrang signs off, “If I win a medal, I will certainly dedicate it to the covid warriors. They have always fought for us, and are still fighting for us, putting their lives on the line. It is our duty to stand alongside them and their families.”

Bajrang has been training in Russia after he decided to skip Poland Open and participate in the Ali Aliyev meet.