Review (Warning: Contains Spoilers): It has been a year since the finale of the second season of The Mandalorian which featured the surprising end credits sequence with Boba Fett on Jabba the Hutt’s abandoned throne. The day has finally arrived with the premiere of The Book of Boba Fett, the spin-off series that fans of the bounty hunter have been waiting for since 1980. A long-time fan favorite in books, comics, and video games, Boba Fett’s standalone series will please countless Star Wars aficionados despite not doing anything too surprising or original. The first episode of The Book of Boba Fett, which was not screened in advance for critics, is comprised of most of the scenes from the teaser and trailer for the Disney+ series, meaning the next seven episodes will feature all-new material.

Chapter 1, titled “Stranger in a Strange Land” is split between a flashback and Boba’s (Temuera Morrison) first days as the new crime lord of Tatooine. For the first twelve minutes of the episode, there is no dialogue as we see Boba dreaming while recuperating inside a bacta tank. His dreams show images from his youth when his father, Jango, was killed in Attack of the Clones as well as the first live-action shot of the inside of a Sarlacc pit. After forty years of fan theorizing, we now have seen how Boba Fett escaped his fate from Return of the Jedi. It is an unsurprising revelation that matches what many already thought would happen. Boba then is mugged by Jawas before being taken captive by Tusken Raiders. It is there that we begin to see Boba’s recovery without his armor.

The sand people keep Boba captive with a Rodian who signals the raiders when Boba escapes. Boba then engages in combat with the tribal leader who quickly bests him and returns him to his chains. It is an interesting sequence because the majority features Boba without his helmet, showing that it is Temuera Morrison. It is the opposite of The Mandalorian where we only saw Pedro Pascal in select scenes across the series. Here, we get a lot of Morrison both under the helmet and with his face out on display.

Before we can see what happens next, Boba is awakened by Fennec Shand (Ming Na) for tributes from the denizens of Tatooine. Many, including a Trandoshan and the Mayor’s envoy, pay tribute or heed warnings for Jabba’s replacement. It quickly becomes apparent that Boba Fett will not rule the same way that Jabba did when he pardons the Gammorean guards who would not surrender. Boba employs them as his own guards to Fennec’s dismay. They then head to Mos Espa to meet Madam Garsa Fwip (Jennifer Beals) who welcomes them and offers her own tribute. Fennec implores Boba to adopt the culture of Tatooine since he refused to arrive carried on a litter, but Boba is reluctant. Before they can leave the cantina, assassins fall upon them, injuring Boba. While his guards take him back to his Bacta tank, Fennec trails the two would-be killers, taking one down and the other into her custody.

In his tank, Boba returns to the dream of his captivity with the Tusken raiders. A small youngling takes him and another captive, a Rodian, out into the desert to dig for water. There, they see thugs killing homesteaders and painting a symbol. The Tusken then commands Boba and the Rodian to dig for water. As they do, Boba implores the Rodian to help them escape to Anchorhead where he can get them off-world. The Rodian ignores him and they dig in the blazing sun. Eventually, they awaken a beast which they all fight with but eventually, Boba is able to kill with his own chains. They decapitate the monster and the young Tusken raider leads them back to the tribe, victoriously. The tribal leader then offers Boba a drink of water, indicating respect.

Star Wars References: Tons of little in-universe references include the Bacta tank, seeing Max Rebo and his band at the Mos Espa cantina, and flashbacks to Attack of the Clones.

Coolest Scene: I really loved finally seeing how Boba Fett escaped the Sarlacc pit, but the best scene in this first episode is a tie between Boba and Fennec fighting off the assassins and Boba taking down the monster with his bare hands. Both are well-executed action scenes and highlight the cinematic quality of this show.

Final Verdict: The Book of Boba Fett’s first episode reminds me a great deal of The Mandalorian series premiere. It works fine for what it is but doesn’t do anything all that original. Everything on-screen looks good, thanks to director Robert Rodriguez and manages to give us more time with Boba Fett unmasked than masked. Jon Favreau knows this character well and manages to give us a lot of backstory in a forty-minute run time, but it feels like half an episode. I learned my lesson by judging The Mandalorian too quickly and I am confident that next week’s episode will compliment this one nicely. As a standalone, there is a lot to unpack in this chapter but nothing we didn’t see coming. I like that Temuera Morrison’s face is seen more than not, but Boba Fett is the masked character we tend to want to see with his helmet on. Overall, there are some good action beats here and a decent tease for what comes next. I am all in to keep watching this series for the next couple of months.

Episode 1 of The Book of Boba Fett is now streaming on Disney+ with new episodes premiering each Wednesday. 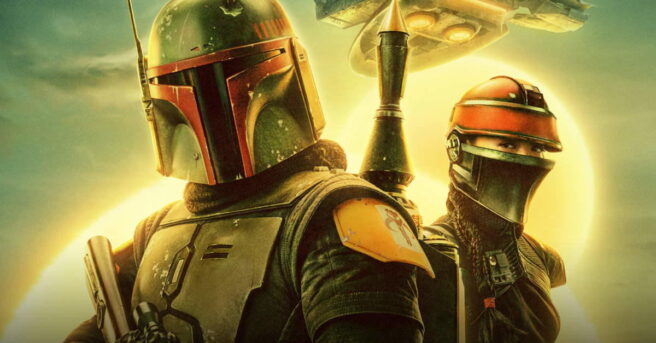